Does anyone know when The Hairpin started allowing gifs in the comments? And am I the only one who feels like that site makes lot of editorial changes without announcing them? Or maybe I just miss the "Best Time I . . ." series more than most people.

I miss that too. And FMK. I miss FMK most of all. 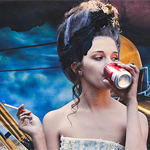 What the heck was up with the Hairpin's last Interview with a Virgin post? I just don't even know where to start.

(I also don't know how anyone could've posted something that without realizing it was going to be pure chum for the comment section.)

Ok, so first Jane left, then Jolie is writing Ask a Clean Person for Jezebel of all places (and Deadspin) and then Nicole announced that she's going off to start a site with melis and NOW THIS??? Does anyone know what the heck is going on with The Hairpin these days and why there is such a mass exodus?

Wow. Super weird. It's sort of like The AV Club exodus, which I still don't fully understand. It always seems to come down to money, to me. I assumed that Jolie and Jane left for more money elsewhere (Gawker, to be specific), but then Emma taking over for Edith makes no sense to me.

What was with the AVClub mass exodus? Between that and the sudden death of ComicsAlliance I suspect there are serious behind-the-server shenanigans happening all over the place.

I really like Nicole and Mallory Ortberg's writing so I'm looking forward to their new site, but I would love to know what went down at The Hairpin. I hope The Hairpin is able to maintain the current level of quality and not turn sarcastic and shrill the way Jezebel has.

I know they don't pay contributors, so that may have had a lot to do with Melis and Jolie leaving. Jane is pregnant, and Edith...well, her heart hasn't seemed in it for months now. I'm honestly the least surprised at her leaving.

Wait, I knew that The Billfold doesn't pay for articles, but The Hairpin doesn't either? Like not even their regular contributors? That's really surprising.

In other blog news, I keep seeing this retweeted

@previouslytv: We are thrilled to announce that we will be live to the world on Monday, May 13!

Any ideas of what it's going to be about? Does anyone even care at this point? I'll be honest and say that I really don't - their behavior when Fametracker shut down has pretty much put me off Wing and Glark forever - and I feel like you can find everything they provided at TWOP (except the forums, weep) elsewhere on the internet now.

BreezyK wrote:Wait, I knew that The Billfold doesn't pay for articles, but The Hairpin doesn't either? Like not even their regular contributors? That's really surprising.

Nope! Nicole, Jane, and (I suspect mostly) Edith were the only ones who got paid.

In other blog news, I keep seeing this retweeted

@previouslytv: We are thrilled to announce that we will be live to the world on Monday, May 13!

Any ideas of what it's going to be about? Does anyone even care at this point? I'll be honest and say that I really don't - their behavior when Fametracker shut down has pretty much put me off Wing and Glark forever - and I feel like you can find everything they provided at TWOP (except the forums, weep) elsewhere on the internet now.

I can't work up much excitement, no.

I'll be honest and say that I really don't - their behavior when Fametracker shut down has pretty much put me off Wing and Glark forever - and I feel like you can find everything they provided at TWOP (except the forums, weep) elsewhere on the internet now.

Their behavior during their last days at twop and Fametracker was so ugly and childish that I'm not inclined to visit a new site. Also, I will say that their sarcastic approach to television seems somewhat dated now. After awhile, the flip and jaded approach becomes tiring. I'd be more interested in a new site from the former AV Club writers, because their writing seems a little more thoughtful.

Unconfirmed, but there's a lot of speculation that the AV Club writers who left are starting a new film site for Pitchfork.

Oh that makes sense. I'm relieved if that's the case, because I love all of those writers and I like the idea of them staying together somewhere. I have a feeling that the TV Club pays the bills at the AV Club these days and it was probably hard to justify paying 5 senior writers higher salaries for stuff that didn't bring in as many pageviews. It's still a bummer to lose them from AVC though.

Also, I was already gone from TWoP when Sars, Wing, and Glark left, so I don't know much about their behavior aside from saying very little publicly. I definitely got the feeling that it wasn't an amicable split with Bravo, but other than that, didn't get much. And, maybe this is an UO, but I didn't really have much of a problem with the way Fametracker went down. They were spending way too much time on it for too little financial return - really hosting a huge community for nothing. Obviously I think Tara should never be allowed to moderate a community ever again, since she definitely seems to hate that and is not suited to it, and I know a lot of people were rudely treated by her toward the end. But that really seemed to me a function of her total burn-out w/r/t that role. As things went crazy in the forums in the last week, the options seemed like either continue trying to moderate or just let it burn. I didn't think the latter was such a horrible option. But I'm probably forgetting some things that they did that were shitty.

For my part, I'm interesting in seeing what Previously.tv even is, and the type of content and contributors they'll have. Extra Hot Great was my favorite podcast by far, and part of that was the way it was organized and the types of segments they had. That I think is harder to find than it seems like it should be. If this site looks good, is organized well, has a good readership with intelligent comments, and has funny, engaging content, I'll be there because I can't seem to find all three of those qualities very easily.

I am LiveJournal friends with one of the AV Club writers who left and she said (in a public post) that she can't talk about where she's going until everything's been finalized, but that she's happy with the move and it will be good for her and the others who left.

Previously TV is up and looking a lot like TWOP2: The TWOPening.

Wow, it really really is. Even the layout looks similar. Maybe they had a 5-year non-compete deal.

Haven't read anything yet but I'm irritated by the red they're using in their headers. The site has a pretty clear palette in the color-blocking in the background, and that red is nowhere near it.

That just looks hideous. My eyes don't know where they're supposed to go.

I don't like the red, but I do appreciate that it seems to have a message of, "hey, TWoP got too big and mean-spirited and the forums were out of control, but we still really dig talking about TV, so let's do this over, but let's have fun and not have forums, just comments, which people don't expect to be orderly!"

Reading through a few articles: eh.

Frankly, it sort of highlights what I had somewhat suspected, that their earlier success was more out of timing than talent. They were one of the few towns with running water and a sheriff in the Wild West days of the Internet. Now there are many places that do what they did better and more professionally. Plus I'm just not on a wavelength with their sense of humor.

Plus I'm just not on a wavelength with their sense of humor.

Yeah, I think that's why I didn't enjoy the articles I read on the site. It's just not my thing at all.

SelfAmused wrote:I guess this is the place to discuss Hugo Schwyzer's meltdown and the resulting controversies.  As Schwyzer is a well-known male feminist blogger and professor who, in a manic episode, confessed to being a fraud, racist, etc., I thought it would belong here.

I like The Toast pretty well so far. It has that kind of earnest grad-schooly vibe that Nicole does well, and any site with writing by Anne Helen Peterson will be one I check regularly. They've gotten essays from some interesting people and introduced me to Emily Books, which has added about a dozen books to my to-read list.

Does anyone know what the hell the point of the Hairpin's "People Who Are Hotter Than Benedict Cumberbatch" post was? Did someone just learn the ol tag? Is it Dadaist art? Desperate click-bait? Why are you wasting time on Cumberbatch when People just declared Adam freakin' Levine the sexiest man alive?

IDK, I think it was just supposed to be funny. I laughed, anyway.